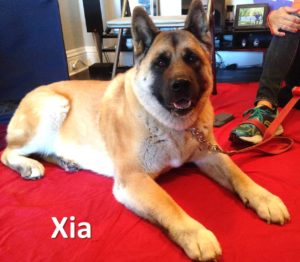 “My 6-year-old Akita is dog aggressive. We are able to walk by other dogs but only with strict discipline from me and a tight leash. She has never been able to play with other dogs. She grew up with an older Akita and they always did play rough. At 4 months I started taking her to the dog park and when she exhibited the same play behaviors there it was clear that I should have gotten help, but thought I could handle it.”

This is a common issue among dogs who were adopted after another dog, and what I call “2nd dog syndrome”. The first dog gets walked alone, gets exposed to the world (even taken to friend’s houses and restaurants, etc.), taken to dog parks to learn to play with other dogs, and meets new people on his own as well. He becomes very confident and well socialized.

Then, when the new dog comes in a few months or years later, the owners think that she will learn everything she needs by hanging out with the first dog.  It’s built-in exercise & entertainment.

The 2nd dog doesn’t (or rarely) gets walked alone, doesn’t go to the dog park alone, and doesn’t get out to tons of new places like her older brother did.  People leave the dogs home rather than try to bring 2 dogs to other homes or businesses.  Or, if they do bring both, it still means that the 2nd dog doesn’t get to learn how to act on their own.  So, her socialization process is stunted and she doesn’t grow into being a confident, happy dog.  This is the first part of what I call 2nd dog syndrome. 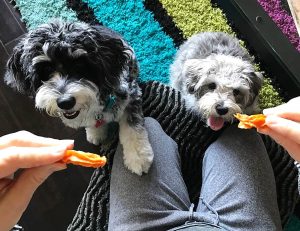 Training 2 dogs together can be challenging,
but you can also use the competition to your advantage!

Another indication of 2nd dog syndrome is improper play with other dogs.  She also learns rough play with her brother, and therefore doesn’t understand how to invite other new dogs to play. Imagine a 6-year-old child thinking that, since it’s OK to run up to their brother and tackle them to initiate play, that they then try to tackle an unsuspecting child at the playground.  The same rules do not apply! But they do not understand this since they did not get a chance to learn how to properly introduce themselves to new potential playmates.

An added issue with 2nd dogs is that the uncomfortableness they experience usually turns to fear and then to aggression by the time they are 1.5 years old.   Frequently there is dog on dog aggression and, if the dog wasn’t properly socialized with people, then there may be human aggression as well.

So, if you get a 2nd dog, please make sure and socialize them on their own.  Walk them on their own, take them to new places alone, and especially take them to the dog park without your other dog so they can be taught appropriate behavior by new dogs and not just rely on interactions with their sibling.

One last note – please do not get a second dog if your first dog is fearful or aggressive.  The new dog/puppy will pick up on these behaviors and mimic them.  You’ll then have 2 aggressive dogs!  Make sure you work with your first dog and rehabilitate any issues before bringing another dog into the family. 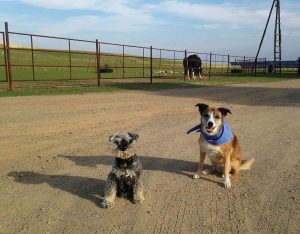