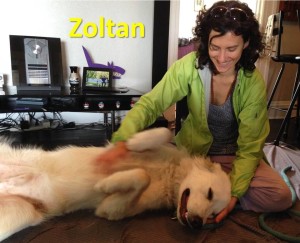 Zoltan is a Great Pyrenees Puppy. He works with his brother on property where she is moving in northern CA to protect the goats, chickens and other animals from coyotes, bears and mountain lions. He’s already doing a great job chasing them off the land.

But… he’s also chasing cars!! So, we worked on exercises to train him to stop that dangerous activity which already caused him a broken jaw.

Rachael also wants him to protect her young daughter from the same predators. So, at The Pooch Coach’s advice, they are going to build their relationship by going for walks and doing training. Zoltran needs to see her daughter as an important part of his life (and not just a play/littermate). She was a little afraid of him since he’s a bit large and playful with her.

The training has been going well and Rachael’s daughter is forming a strong bond with Zoltran. I’m sure he’s going to do a great job protecting her at her new home in the forrest.

Children can learn to give commands to dogs at a very young age. It helps build their confidence in general, and especially with their dog, who can be overwhelming sometimes for a small child.

Teaching your dog to respect children and listen to them is an important aspect of training. So, even if you don’t have your own children, have your dog sit for a treat from kids at parks, visiting you, etc. That way, he’ll learn to love and respect them – and the kids will learn how great it feels to relate to and communicate with an animal.

Read more about kids and dogs.