Here are some of the entertainment shows & films The Pooch Coach has been involved with over the last 17 years. 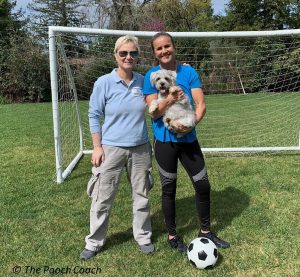 Beverly with the stars of the hit show “MythBusters”.
She was chosen to help test: “You can’t teach an old dog new tricks”.
She has worked with both Jamie and Adam to train their dogs.


Click here to see the final dog training contest between Jamie and Adam!

Beverly working with Adam to train an “old dog”.

Beverly being filmed for a feature on “Animal Planet” showing her volunteer training of foster dogs and newly adopted dogs from Rocket Dog Rescue.

The Pooch Coach got to help the NBA Golden State Warriors’ star, Klay Thompson, with his bulldog Rocco. They were filmed for an upcoming episode to air in early 2016 with Ric Bucher on “Bleacher Report“. Klay Thompson’s dog, Rocco, was not dropping the frisbee after he fetched it, so Beverly taught Klay to use the “drop it” command with Rocco, and it worked perfectly! Click here to read our blog on Klay’s training session and see more pics.

Beverly Ulbrich, of The Pooch Coach Dog Training, with Klay Thompson and his bulldog Rocco

The Pooch Coach training Klay Thompson and his dog Rocco

Beverly was chosen as a celebrity judge for the National TV Show “America’s Cutest Puppies”, which was originally aired in March of 2007.

Beverly’s training abilities allowed her puppy to land the lead role in a movie. Included in the cast is Calico Cooper (Alice Cooper’s daughter). Below are some pictures from the set of the movie “Puppy”, starring Kompis, Beverly’s dog. This independent film was released in early 2007.

Kompis in a scene with Calico Cooper

Beverly on the set with the cast

Another scene with Kompis, Calico and a local actress.

Beverly was hired in 2009 & 2010 to cast, train and handle all of the over 100 dogs for the movie “Doggie B“. Her dog Kompis was once again one of the stars, and Beverly got to play a couple of cameo roles as well.

Kompis trying to get a biscuit from evil Gertrude.

The Pooch Coach on set, ready for her dog dancing scenes

Beverly & her sidekick Kompis were featured on 3 episodes of Bravo’s “Below Deck” in 2 consecutive seasons. Beverly demonstrated how a well-trained dog can go anywhere – even on a mega yacht cruising around the Caribbean and British Virgin Islands!

Beverly found, wrangled and trained all the dogs for an episode of “Prototype This!”, an International show on the Discovery Channel, in March 2009. She got to meet the original Robot from Lost in Space during the shoot!

Associated Press photo of Beverly being filmed for a movie released in 2005 that features her training capabilities and successful business.  The movie is called “24 hours on Craigslist”.

Beverley Ulbrich instructs her dog, Beavis, 7, to do a trick in San Francisco during the filming of a documentary by Zealot Pictures spanning 24 hours on Craigslist, a popular San Francisco Bay Area online community, on Monday, August 4, 2003. Josh Brooks is holding a boom while Jessica Young runs the video camera. (AP Photo/Jakub Mosur)

Kompis played the coveted role of Toto in the Wizard of Oz in dozens of live performances for 2 different theater troupes in 2 cities. She was only 15 months old and was already quite the star! She even signed paw-autographs after the show.

Watch Beverly with TV’s Maggie Lawson (“Pysch”, “Two and a Half Men” & “Angel from Hell”) on DOGTV’s Dog Star

Beverly filming on green screen with TV’s Maggie Lawson for DOGTV and filming on location with dogs for DOGTV’s programming.

Beverly being filmed for a documentary about dogs. March 2015. 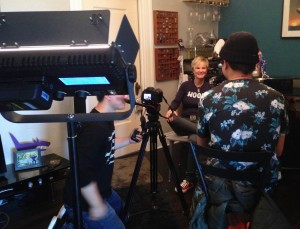 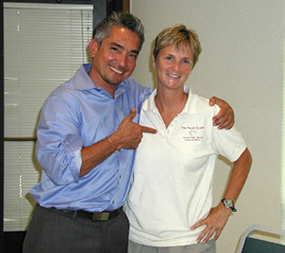 Legal Note: The Pooch Coach and Beverly Ulbrich have no affiliation with Cesar Milan or “The Dog Whisperer” TV program. 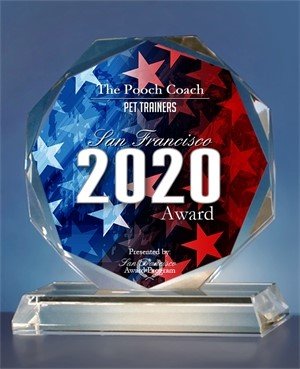