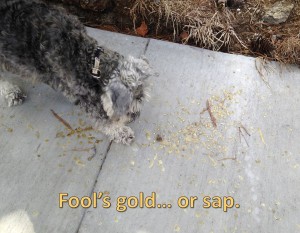 Poor Kompis. She thought she had hit the jackpot!

Do you think that dogs are totally colorblind, or that they only see in black and white? That’s a common misconception.

While dogs’ color vision is somewhat limited and different than ours, they do see color, and a look at the world through a dog’s eyes can provide insight into how they perceive the world.

Humans see the world in color because we (usually) have three types of color receptor cells, or cones, in our eyes. These are sensitive individually to red, green, and blue light, and the different intensities and proportions of those three colors, as seen by our eyes, are put together by the brain to create the full-color spectrum that we perceive.

For dogs, their color vision is most similar to a human with red-green color blindness, although there are other differences. Dogs are less sensitive to variations in gray shades than humans are, as well as only about half as sensitive to changes in brightness.

Dogs are also nearsighted. Dogs are estimated to have 20/75 vision. So that’s why sometimes your dog doesn’t recognize you or others at distances when we can clearly see.

However, dogs do outperform humans in some visual abilities. Dogs are much more sensitive to motion at a distance – anywhere from 10 to 20 times more sensitive than humans. Their vision is also well-suited to hunting during dawn and dusk.

Hopefully, this helps explain some of the times you’ve wondered why your dog can’t see some things you thought he should… and why he noticed some things that you did not!

One last note…  If your dog is a breed whose hair naturally comes over their eyes, please make sure you clear it often so they can see.  Dogs are going to be more reactive and anxious if you block their eyesight.  It might look cute, but how would you like to walk around with impaired vision?  I’ve seen dogs become less reactive and aggressive once you clear their vision. 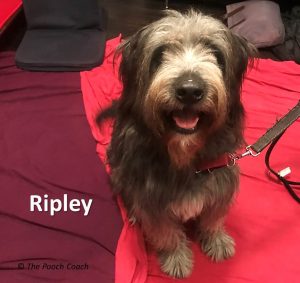 If you can’t clearly see your dog’s eyes, they can’t see YOU clearly, either!