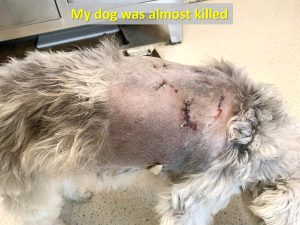 (Here is the original post about the violent, life-threatening dog attack on Musik, FYI:  Surviving a Dog Mauling)

We received the Vicious and Dangerous Dog (VDD) hearing report several days ago. The court’s conclusion was illegal and unacceptable. But I have been too upset and disillusioned to deal with it.

Here are the relevant pieces of the report with my comments:

Highlighted are the 3 out of 4 definitions of what a “vicious and dangerous dog” is that Adele meets.

She only needed to meet ONE criteria. She meets THREE out of four.

Yet, they concluded that it would be difficult to rehome her if she was deemed vicious and dangerous, so they decided not to deem her as such. The text below is directly under the definition above in their report.

They go on to explain  that the dog would be hard to adopt again if it were deemed V & D:

So, the dog needs to be leashed and muzzled at all times to be safe, but they are not deeming it vicious and dangerous?? This is not only irresponsible of them, but illegal.  They aren’t following their own guidelines!

When I reached out to a previous long time, much more experienced SF VDD Hearing officer to see what they thought of this ruling, they replied:

“What nonsense!!
Of course it’s vicious and dangerous!!!

A VD dog can be re-homed—but it must be done with all the cautions and restrictions available.

It appears that the adoption organization doesn’t wish to be burdened with the responsibility to place a dog that is clearly is vicious.

The hearing officer’s job is not to help adopt a dog but rather protect the public. PERIOD!!!”

Family Dog Rescue took the dog to UC Davis on the order of the court for an assessment, and their assessment was as follows:

So UC Davis also said that the dog should be required to wear a muzzle and be on leash…  and never be allowed around smaller animals – i.e. the dog IS vicious and dangerous and needs the associated precautions.

There is no fairness or logic in any of this, and I give up.

If anyone else wants to fight this battle and see if we can fix dog adoptions and/or VDD court, let me know. I’m willing to help in any way I can. But I can no longer lead this battle. I am emotionally exhausted from all  of this and need to step down.  But I wanted to update all the concerned people who deserve to know how broken our system is.

Two of the pictures we submitted to the court.

She had 2 drains and required emergency surgery and an overnight stay at the hospital. She woke up in the hospital on her 2nd birthday – alone, scared, and in horrible pain.  She could not be picked up without screaming in pain for 5 days.