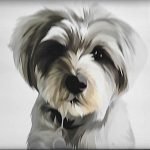 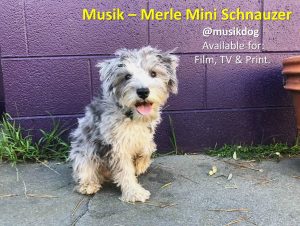 Available in San Francisco Bay Area, and will consider travel. Contact her owner/manager, Beverly Ulbrich, “The Pooch Coach” at bju@poochcoach.com

The following video is a compilation of our favorite ad shoots from 2017-2020.

She is an amazing performer, and gets better every day!

Here is a good example of some of her talents at 1 year old. This entire 1 min. video was filmed (& put together) in about an hour.  See some of her amazing skills – including not moving from her stay when a treat bounces off her face (by accident).  She is a one-take wonder!

Musik and her screen brother in a Sept 2019 shoot.

We saw Musik’s work online, and knew we had to have this pup to star in our film. We were so lucky to have such a talented and easy dog to work with! A true superstar!” Nils Forstall , Writer & Director.

Musik played Jimmie Fails’ neighbor’s dog in The Last Black Man in San Fancisco. Here she is with Jimmie and her on screen dad in rehearsal.

Musik in an Ad for Haggar Clothing

Here she is in her advertisement for Haggar Clothing.

Musik in an Ad for Grove Collaborative

Musik had to get a dreaded bath for this Grove Collaborative shoot, but she was a real trooper!

“We chose Musik because of her looks, but we were astonished with her talents! She was able to do things we hadn’t even put in the script because we didn’t realize a dog could do them… A real star!” Danielle Cheifetz, Producer / Assistant Director @ Kraken Cove Productions 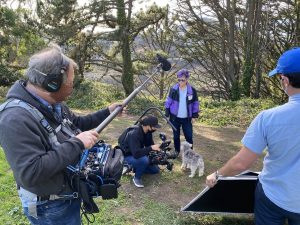 Musik performing for an all day shoot with The Dodo.

“Musik is one of the best show dogs I have ever had the pleasure of working with. Total pro on set and a delight to work with, Musik is our go to Bay Area dog talent!” Ezra Gould, Director, The Dodo

Musik filmed about a dozen scenes for DOGTV. Here’s one of our favorites.

“When filming content for DOGTV (television for dogs), it’s important for us to work with the most professional and experienced dog trainers in order to get the best content for dogs to enjoy. Beverly’s dogs Kompis & Musik are so talented and easy to work with because Beverly can communicate exactly what they needed to do, and they always did it! I don’t know how she does it, but it works beautifully! I’m looking forward to working with Beverly and her pup on more DOGTV programs.” Ron Levi, Founder/Chief Content Officer, DOGTV

Musik at 6 Months Old! Outdoor distractions – perfect stay, sit, down, and come and “look at me”

One of the service dog training videos Musik helped shoot.

Need an ordained minister?  Musik is your dog!
Click below for more info. 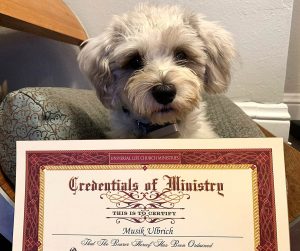 For information on Beverly’s dog training, wrangling and handling skills and history, see this page with her work:

If you need other types of dogs, feel free to contact her as well! 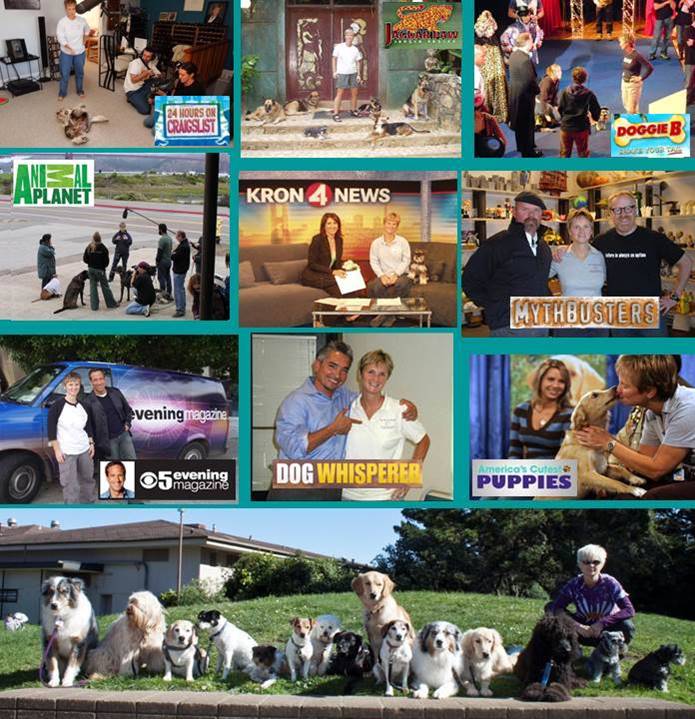