SOCIALIZING YOUR NEW PUPPY OR DOG

THE IMPORTANCE OF SOCIALIZING YOUR NEW PUPPY OR DOG

One of the most important things for all new dogs is to learn about their new environment and the people & things in it. Socializing your new puppy or dog is key to their future mental health.  Even as a professional trainer, I am saying that this is MORE CRITICAL than commands or obedience when you first get them. 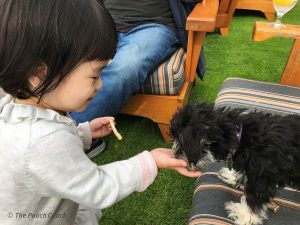 Dogs need to specifically learn how to interact with children

Ideally, a puppy should meet 100 people before they are 12 weeks old! That way, they see big & small, old & young, hats, beards, skin tones, etc. The more they see, the more easily they will adapt.

The same goes for sounds and objects. Expose them to skateboards, sirens, bikes, & children playing. They will take it all in as part of their new world.

A good way to think about this is that you want your dog to learn about everything that they will be exposed to as soon as possible.   Young puppies don’t even know to fear anything until they are about 12 weeks old.  So everything they see will be interesting and fun and not scary.  But, for instance, if they never see anything on wheels (e.g. skateboards, bikes, wheelchairs) until they are several months old, these things will surprise and scare them. 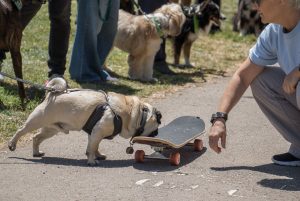 Skateboards are one of the most common things dogs fear.

If you are adopting an older dog, you want to do these intros as soon as possible as well.  For the first 2 months or so, the dog is a bit in shock and just trying to figure out their new living situation. So it’s important that you show them as much as possible while they are open to it.  Once they get settled in, new places, people and things could be seen as frightening.

Allowing your new puppy or dog to hear noises that will occur at some point in their lives is also important.  Do you have thunderstorms?  Fireworks?  Loud music?  New baby coming? Let them hear it and make it FUN!  You can find recordings online if needed. Celebrate when you hear these sounds – time for treats & toys!  Don’t act like you’re worried they will be scared, or you will be signaling to them to BE scared!   More on how to help your dog with noise desensitization here: Help with fear of fireworks

Fireworks can be scary… but it’s easy to celebrate with your dog instead!

So, think about what you want to do with your dog and where you want to go, and start doing these things right away, and your dog will take it all in as “the norm”.

Dangers of not socializing

If a dog does not get exposed to these various things, then they will most likely become fearful.  This in and of itself should warrant helping them, even if it means hiring a professional.  You don’t want your dog to be needlessly stressed.  Just like with people, stress is unpleasant and can lead to sickness.  But, even more importantly, what most people do not realize is that their adorable, sweet, shy dog will most likely turn from being fearful to aggressive towards these things. 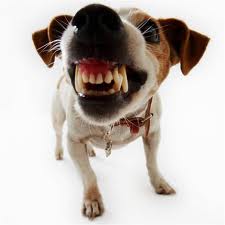 That’s why dogs lunge at motorcycles and skateboards, bark at (or try to bite!) people coming into your home, or angrily bark at other dogs on walks.  It’s all because they didn’t see enough of these things early on.  Their uncomfortableness eventually turns into a growl or a bark.  They quickly learn that the bark works – the postman walks away from the house; the bike zooms off; the person jumps back in surprise; the other dog and their owner give you a wide berth.  The aggression has begun and now will only get worse if you do not address it.

And, speaking as someone who works on these issues daily, it’s MUCH easier to work with a scared dog than an aggressive one.  And, there’s also a large amount of stress for the families dealing with aggressive dogs as they try to be hyper-vigilant attempting to avoid their dog’s triggers.  So, help decrease stress for everyone involved and get some help.  There is nothing that a dog can’t get used to with enough help & guidance.

Make sure you handle your dog all over so that there are no parts of their body where they aren’t comfortable being touched.  You need to be able to take things out their mouths, touch their paws (for clipping, but also for removing foxtails or burrs, etc), their ears, etc.  You want them to be comfortable with you as well as with strangers.  Vets, dog sitters/walkers and groomers will need to be able to handle them, too.

You also need to introduce grooming: baths, nail clipping, brushing and teeth brushing.  Start slowly if they are an older dog, just in case they have had any bad prior experiences.

When is it safe to take your puppy outside?

You need to be careful with a puppy until they have all 3 of their first vaccinations, especially if you’re in an area that is prone to various diseases – in particular, Parvo, which can be deadly.

That said, some people are told by their vets to keep their dog inside and not meet other dogs until they have all their shots, including rabies.  This means they don’t exposed to the outdoors, or even to being on a leash, until they are 4 months old!  Given what I’ve written above, this is horrible for the socialization aspect of their development.

Puppies can & do start learning the second they walk in your door. You can start leash training them in your house and introducing them to people there as well. If outside, just be careful when walking your dog on a leash to keep him away from trees and grass where other dogs have gone to the bathroom and there is more likelihood of disease. Ironically, your pup is more likely to catch something going to your vet’s office (where there are tons of germs and sick dogs around!) than walking in front of your house. And your dog is not going to get rabies by walking in your neighborhood either. There hasn’t even been a case of rabies in the Bay Area for over 100 years.

Here is Musik learning to walk at 3 months:

There are many puppy socialization and playgroups in most cities as well.  You just need proof of 1-2 rounds of shots to get in.  If you’re worried about a particular area, just carry your dog and let them see & smell the air of the area.  I make sure and “walk” my new puppies around dog parks – in my arms.  So, when they finally can safely walk around, they aren’t afraid – in fact, they are raring to go!

Just like you would not keep your child indoors and alone for the first several years of this life, your puppy cannot and should not be isolated for his first several weeks or months with you. Dozens of behavior problems can occur due to under-socialization of a puppy… Ones that take much time, expertise, and expense to fix. So, avoid the problems up front and teach your pup confidence and social skills as soon as you get him!

Here’s some more info from the American Veterinary Society of Animal Behavior on this topic:

So, get out there and have some fun with your pup!!! 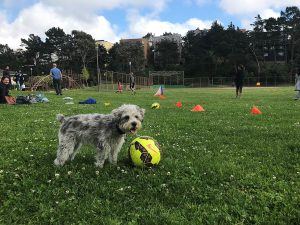