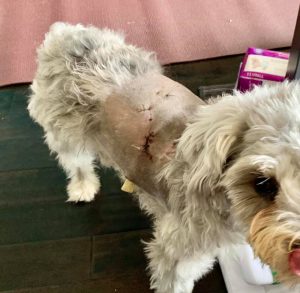 SURVIVING A DOG ATTACK
and its emotional and physical aftermath.

And… What is the responsibility of Dog Rescue organizations and new dog adopters?

For those of you who have not heard, my beloved Musik was brutally attacked at the dog park on Saturday. The picture above shows only half of her wounds, and one of the 2 drains that were inserted. All the dark, non-pink skin is solid bruising.

It was an ON leash dog park, but people who adopted a huge husky mix two days earlier decided to let it off leash at this park. It trotted across a huge open field to come over to me and my dog – I thought to say hello. Musik was casually sniffing in the grass, and I was standing just a couple feet away. (The owners were calling the dog, but it was ignoring them. I see that often enough to not make that a major concern). The other dog didn’t make an intense beeline like dogs who want to act aggressively do. Instead, looking back, I realize that it was hunting. She was walking slowly and casually so that she could sneak up on her prey.

Once the dog got up to Musik, she leaned over attacked, and grabbed her by her back, picked her up, and immediately began violently shaking her. The dog shook and shook my poor little Musik while she flew back and forth through the air screaming helplessly. (Which is now the only thing I see over & over when I close my eyes). I finally dove on the dog and wrestled it to the ground and tried to pry its mouth open while yelling for its owners. The owners eventually got there and helped to get their dog removed from my dog.

My dog then ran away out of sheer panic and adrenaline. I chased her down and eventually found her almost all the way back to our house. Another very dangerous situation.

I then rushed her to the ER where she underwent surgery and had to stay overnight. She received multiple severe lacerations, has two drains in her body and is covered with stitches as well. Even on two types of painkillers, she is in such intense pain that I can barely lift her up and, if I do it incorrectly, she screams in pain. It is heartbreaking.

But where is the Husky mix? We didn’t know. The new adopted owners immediately returned her to the rescue’s shelter after the incident. The rescue did not return any one’s emails (including 3 of mine) or attempts to reach them. And, even though they were told about the incident, they have not reached out to try to contact me. They don’t even have a phone number listed on their website or Facebook page! (Note: Don’t adopt from an agency that doesn’t have a phone number). So we are now suspecting they are just going to adopt the dog out to another unsuspecting couple, and this time the next victim might not make it out alive.

Up to now, I have not named this rescue publicly, but I’m going to name them now: Family Dog Rescue . They have had their chance to respond to us privately, but they are forcing our hand now.

Hopefully FDR will do the right thing and keep this dog from hurting any other dogs in the future. It is a violent, intentional killer, and should not be someone’s pet.

UPDATE: FDR rescue contacted me – to legally threaten me and tell me to take down my social media posts that spoke of the attack.  They supposedly have the dog at their shelter and we have to go to Vicious and Dangerous Dog Court, for which I have to prep documents and then relive the experience again just to assure the dog does not get adopted out to another unsuspecting person.  If they do not euthanize the dog, it will have to wear a muzzle in public for the rest of its life.  But, instead of just doing the right thing, FDR is forcing the issue and requiring the court date.  (Several previous FDR employees have reached out to share support and horror stories.)

And now my innocent puppy and I are left with the emotional and physical scars that we will undoubtedly carry the rest of our lives. I am in fact considering ending my career at this point. As I take time off to nurse Musik back to health, I will be reconsidering my ability to serve this community in the future.

But, knowing that (and having directly worked with) many others who’ve had to go through similar situations (of varying degrees of injury and harm, to the point of death), I’ve decided that I’m going to try to chronicle our recovery together as best I can so people will have somewhere to turn to learn and get some tips and not feel so alone.

I also hope, for anyone who has a dog, especially a large dog, and especially a newly adopted dog, who does not have perfect recall, and who you are not 100% sure that they are gentle and unaggressive with other dogs, that you understand that your dog should never ever ever ever EVER be off leash – unless it’s in a private enclosure with no other dogs.

A note to my clients: I am having to shut down my business for a few weeks to take care of Musik.

First, she requires 24 x 7 care since she can barely move or walk, is in so much pain that she often screams when touched or picked up -even while on a bed – and she will be on severe motion restrictions for at least two weeks. Also, I obviously cannot welcome dogs into my home when I have a dog here who was recently traumatized by a vicious attack. Until Musik is emotionally and physically healed, my commitment is to her, and not to my work. I hope you all understand. But if you don’t, you are welcome to stop working with me as your behaviorist. Otherwise, I am willing to do phone consultations in the meantime to give advice and keep programs moving along. And I promise to have face-to-face meetings again as soon as possible.