The Danger of Foxtails for Dogs

THE DANGER OF FOXTAILS FOR DOGS

They can be deadly.

Kompis was rubbing at her eye after being outside at dog parks all day for a TV shoot.  I looked at it, and it was all red inside: 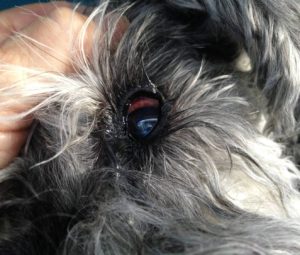 Kompis’ eye was all red inside.

Kompis was mostly acting like it itched, so I thought something might have gotten in there.  I purchased saline solution and rinsed her eye a couple times, but it didn’t seem to help.

She kept pawing at her eye off and on and letting me know it bothered her.  She was staying close by me too, which told me something was definitely wrong.

So I called her housecall vet, Dr Araba of Blue Sparrow Holistic  and they could come the next evening.

The vet arrived and took a look at Kompis. 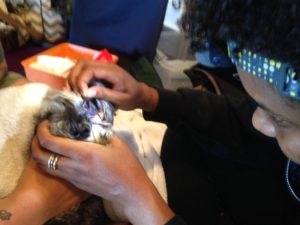 After looking around for quite a while, she finally saw that, way up under her lid, there was a foxtail!   She wasn’t sure she could remove it without surgery, but she was going to try.  She was also concerned that it could have scratched her cornea.

I was so scared!  I didn’t want to have her put under the knife for eye surgery!  I was panicked, but hoped for the best as Dr Araba attempted to see if she could remove it without going to the ER and putting Kompis under anesthesia. 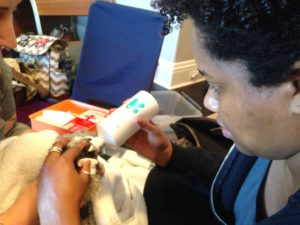 Dr Araba rinsed out Kompis’ eye with saline several times before and after the procedure.

We held her really tight, and Dr Araba got under her lid with tweezers while Kompis was a brave little girl and she pulled it out successfully!!! 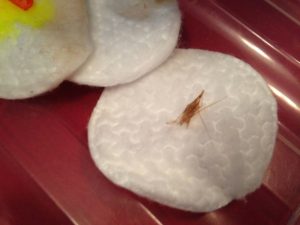 The foxtail that was embedded under Kompis’ eyelid.

She then rinsed her eye again and then put in some dye to check the surface for scratches.  She used a black light with the dye to look for it settling into any cuts.   If so, then we’d have to worry about more severe damage and follow up care. 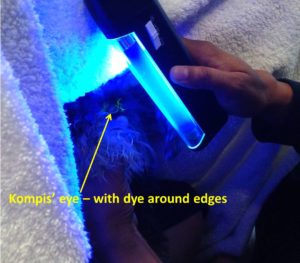 The black light showed no cuts on Kompis’ eye

So, that was good news!

Now I just have to put antibiotic ointment on her eye 2 times a day for a week. 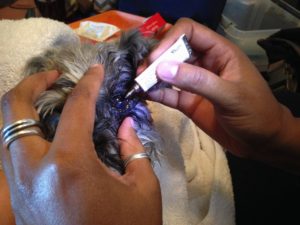 Antibiotic ointment has to be administered 2X a day

Poor little Kompis!  Thank goodness we avoided having to have surgery.  Dr Araba told horror stories about how foxtails have gotten into dogs’ eyes and worked their way behind their eyes, causing infections – and therefore dogs have lost an eyeball!   They also get in dog’s noses and require surgical removal.  She’s even seen them get into dogs’ lungs and cause lungs to get infected and burst.

They also easily get wedged between dogs’ toes.   I’ve taken 3 dogs to the vets for surgical procedures for this in the past. They can even get inside dogs’ genitals!

The bottom line is foxtails are evil. 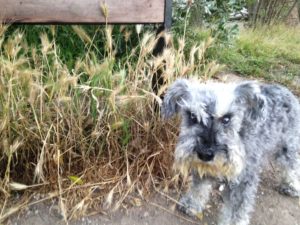 So, try your best to keep your dog away from these horrible plants.  They are everywhere, even on city streets, let alone in dog parks and by beach areas.   Even our neighborhood park has them growing not only around its perimeter, but even in the main area where grass once was.   Several years ago, there were no foxtails there at all.

If your dog has been exposed, then search paws, ears, underbelly, etc.  Also, watch for your dog licking and/or biting himself. If you suspect anything, get to a vet or emergency room (a whole ‘nother topic! Read about how to find a good ER hospital)

If you’re not familiar with the foxtail plant, or you’d like to learn more about foxtails, here’s the wikipedia page on the little spawns of satan.

I was also told that anything to do with a dog’s eye should be seen ASAP as well.  If this had gone on any longer, Kompis would have definitely required surgery and might have lost vision in that eye.

Be careful out there, everyone! 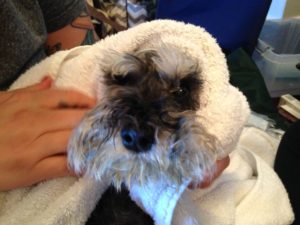 Little Kompis was a trooper – letting the vet poke around her eye for so long!